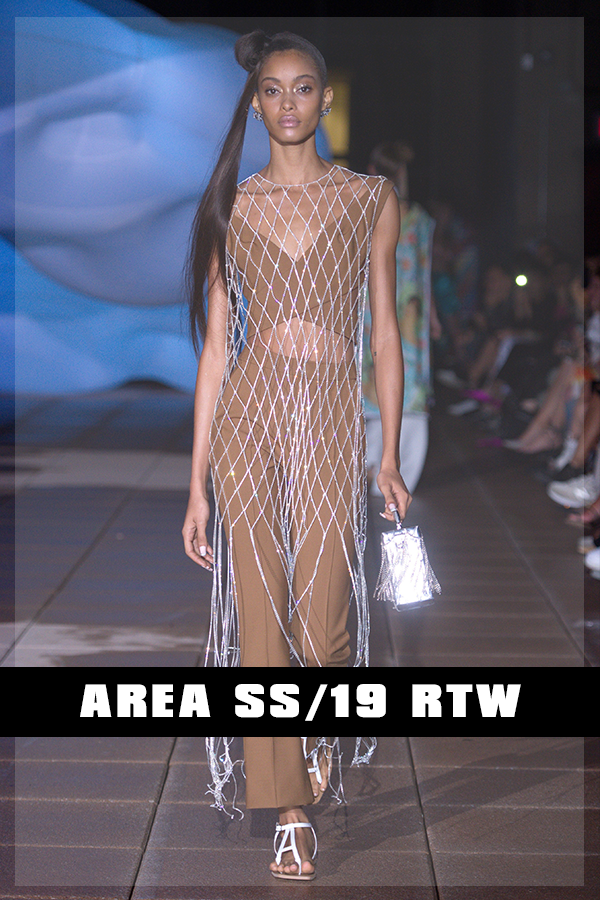 When you think of Spring/Summer clothes, many could easily name the same adjectives to describe them. Fun, relaxed and effortless would be my top three and how I would describe the Area’s SS/19 collection. And it’s no wonder when VOGUE RUNWAY cited Libuše Niklová as this collection’s muse.

‘Who is Libuše Niklová?’, you ask? (I know, I was in the dark too but always love to learn something new.) She was the Czech genius artist and inventor that created the first inflatable toys for children in the Sixties. ‘Playing’ was critical to this collection and for Area designers, Piotrek Panszczyk and Beckett Fogg, making her the perfect muse.

‘Playing’ Was Key For Area’s Summer

So how do you reinterpret inflatable creatures and strangely proportioned toys into a collection? Simply, by focusing on the fun and playful aspect of it all into everything that makes an outfit. Area’s designers told VOGUE RUNWAY, “We started thinking: What is important for us in fashion? I think as designers, in design in general, our core value is play. Playing is something so intellectual but also so pure,” which was very obvious from their designs. Thankfully, as much as fashion is all about having fun, Area took it literally without being kitschy or obvious. 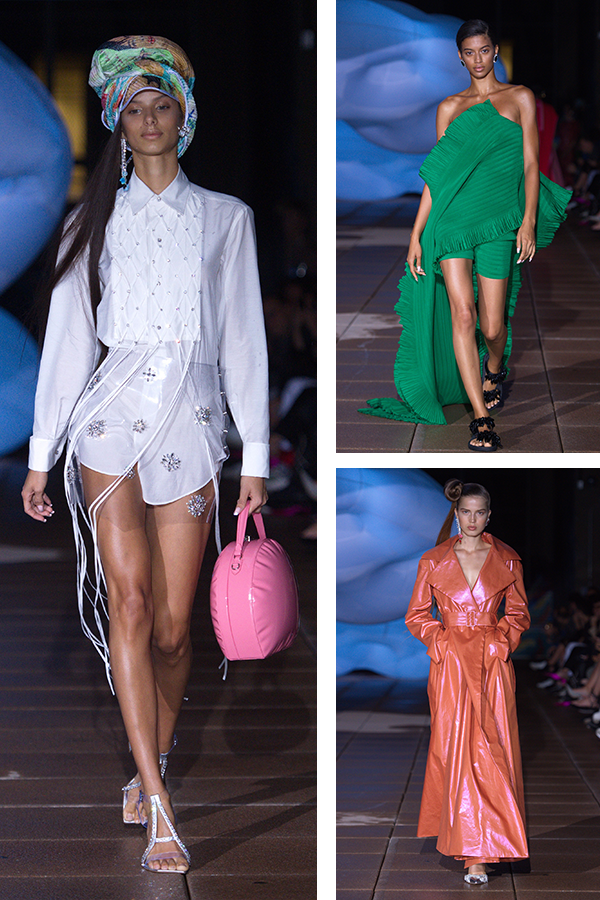 As seen in the designs throughout, Area’s designers manifested fun in several ways. There were fabrics in unexpected tones similar to the orange long trench with a shiny pearlescent pink sheen (right)  while the inflatable toys were reimagined by way of a pink bag (left) and other accessories.

A clear plastic mini apron, complete with crystal embellishments (left) amped up this tailored white shirt’s playfulness. Similarly, sparkly strappy sandals in a geo-pattern complemented the look. Then came the fun of playing with proportions as seen in the oversized colorful turban that finished that look.

Area continued playing with fun in mixing silhouettes with texture. Kelly green, one of my favorite greens, made this pleated look (right) really stand out. A strapless top in a pleated fabric captivated with its drape across the chest from the left. Accentuated by a ruffled hem on both sides, it commanded attention.  With its long length, it glided down to the floor, giving the effect of a long train. Add shorts in the same fabric to the look and you can easily wear this for evening or day.

Another fun green look that played with proportion was the one below (right), thanks to the brilliantly structured big hat. Area’s iteration of a newsboy cap with a Sixties influence, mixed together with a brimmed turban effect, is a hat that would be hard for one to want to take off. A fun cropped sleeveless top with a neatly tied oversized bow at the center gave the outfit sweet innocence. To complete the look, embellished kelly green cigarette pants with crystals down the sides in a diamond line pattern were added.

The sparkle of the crystals made their way to a similarly patterned choker necklace, further accentuating the beauty of the green big hat. And no look is complete without the right bag, which in this case was a turquoise handheld mini trunk purse and matte Cookie Monster blue long nails.

Can’t Play Without Some Shine

Lurex came flirted with play in some of the looks. Below, you can see silver in a geometric pattern on biker shorts and its matching three-quarter sleeveless jacket. What I love about this look is how easily it can be a standalone look with a vacancy for addition.

The matching biker shorts could be paired with a long-sleeved or tee shirt, a tank top, or a sports bra, worn underneath the jacket. Whereas a sheer slip dress or sheer tunic over the biker shorts, in a contrasting color, with the jacket worn over it, to give the look more depth. But the key here is to have fun!

But it was all about shine with the first look. A simple toffee colored pant set, comprised of a criss-cross cropped fitted top with slightly cropped trousers, set the stage for some sparkle. A fun large diamond pattern sleeveless tunic worn over the top and pants added drama hemmed with long crystal strings down to the ankles. Throw in a silver handheld purse to the ensemble, made sure to say this neutral color came to play!

Now, who can say they can have fun if there’s too much effort involved? I surely can’t, which is why I have plenty of dresses in my closet. And this was key for Area, as noted in two of the looks below.

One look had simple white long trousers that were slim on top with a stovepipe leg. But here’s where it got interesting – the top! ‘Barazoku magazine, the first commercial Japanese gay magazine, is where the designers found inspo,’ said VOGUE RUNWAY. But for what exactly – the top’s print.

The designers recruited an artist to repaint a cover from the magazine for a print. In bright colors, the all-over print on white decorated a three-quarter length sleeveless shirt. The shirt, that crisscrossed along the front, had long panels that would mimic the movement of the pants when walking.

Long trousers in the pink geometric pattern with silver lurex played up the fun factor, yet again. Paired with a cropped hot pink long-sleeved top decorated with crystals, prompted the fun. The embellishments made their way down the sleeves, from the top of the shoulders down to the wrist. But this Area woman was busy indeed, as noted by the pushed up sleeves. A bubble gum pink rounded mini trunk purse with a hot pink handle and hot pink lattice detail made this practical look scream ‘fun, fun, fun!’ 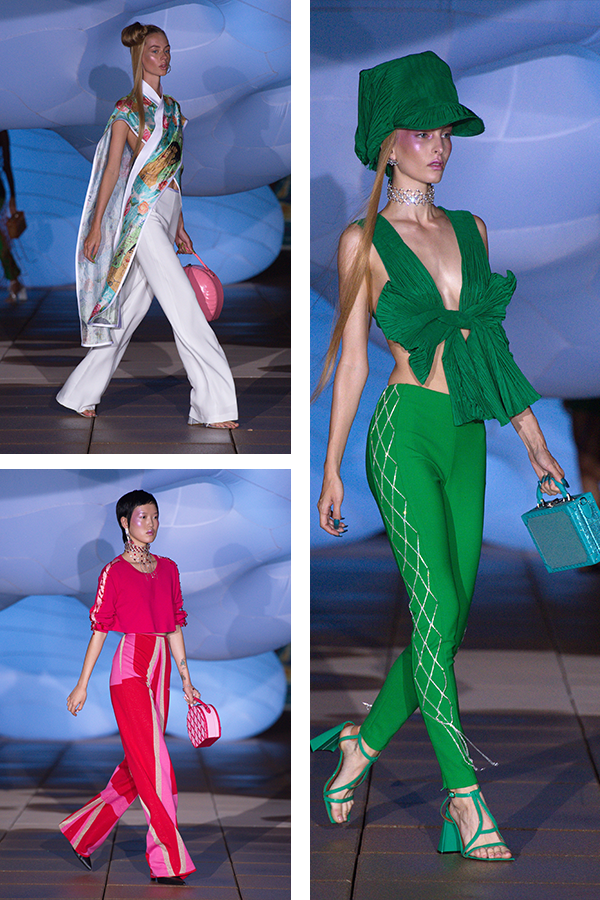