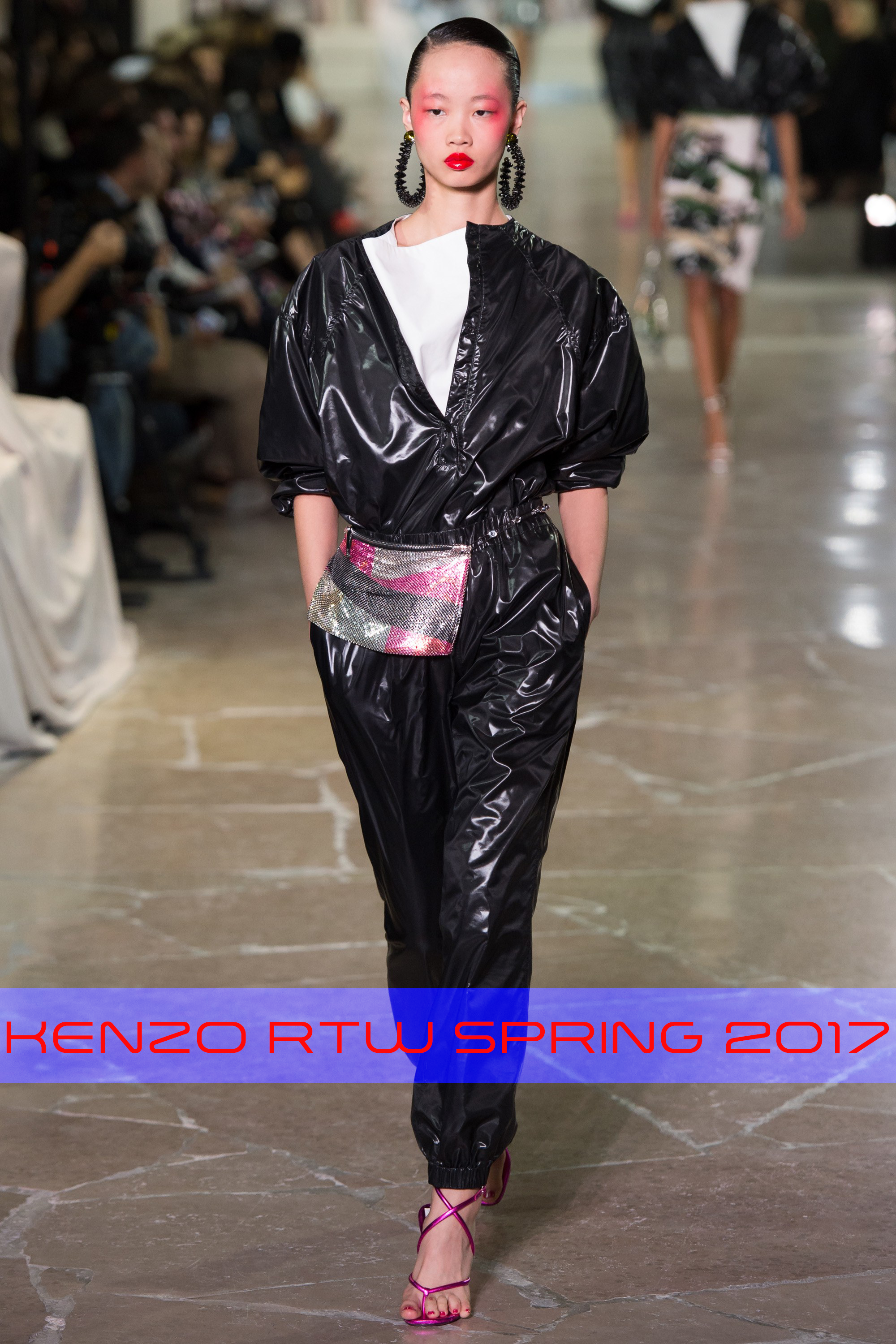 After looking at Kenzo’s Spring collection, I couldn’t help but think of them as one of the best contenders to design costumes for the ‘Bladerunner’ film reboot. A collection knee deep in the Seventies, there are so many nuances about each + every piece, you can not NOT but see them being worn in the future just the same. 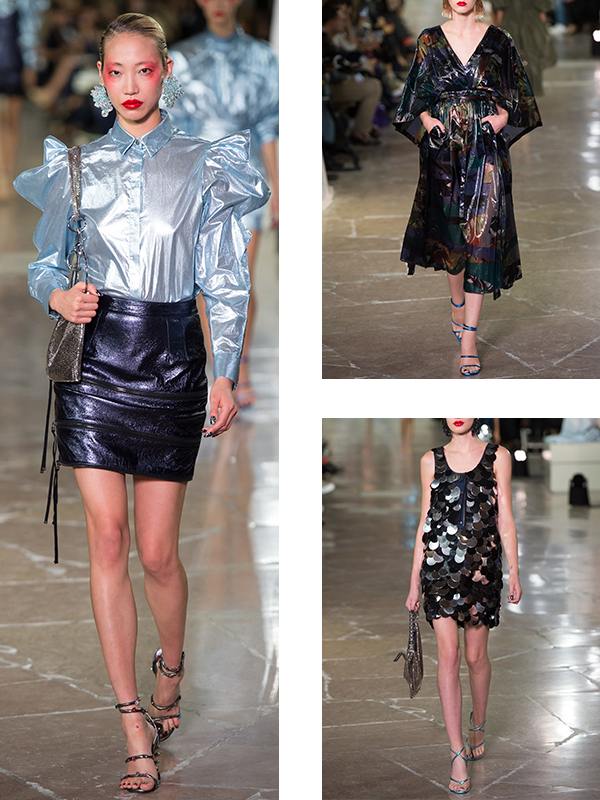 As VOGUE RUNWAY remembers, Kenzo Takada having been known to staged a fashion show back in 1977 in Studio 54, complete with models carrying on with dangling cigarettes from their lips + balloons bouncing at their feet + the genius behind Designers Carol Lim + Humberto Leon who’ve always had their finger on the pulse of what should be trending is more than evident here as has been the case ever since they hit the scene, with their ‘in the know’ boutique + brand Opening Ceremony. But for this collection, according to VOGUE RUNWAY, ‘Their Resort collection was a nod to their own ’90s club kid days, + this season they cycled back four decades to the epic night in the house’s early history.’ 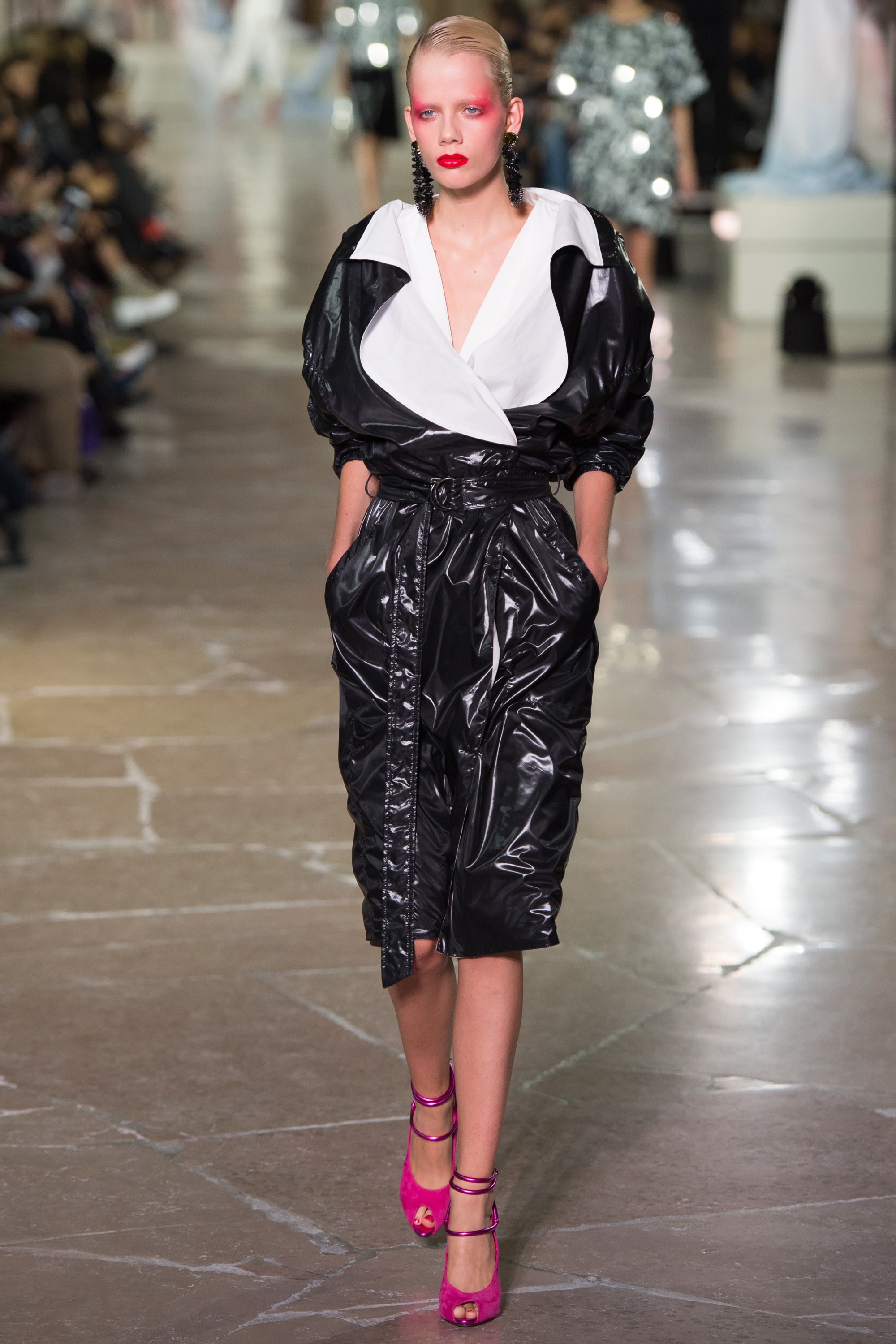 With many metallics to gush over, you see looks that would work just as well in a club as they would in the office, thanks to the current reality that we now we live in an age where sparkle is not just left for sundown. You can sparkle as early as 8 a.m. especially when it’s a gold lamé baggy top, paired with a cream skirt + strappy black heeled sandals as seen below. If that doesn’t scream ‘GirlBoss’ I don’t know what does?!

Then you have denim looks that take place of your typical skirt suit, with a trapeze denim jacket, paired with a short skirt with large pockets. Of course, I’m sure had the denim been lighter in color, that ensemble’s impact wouldn’t be as strong. 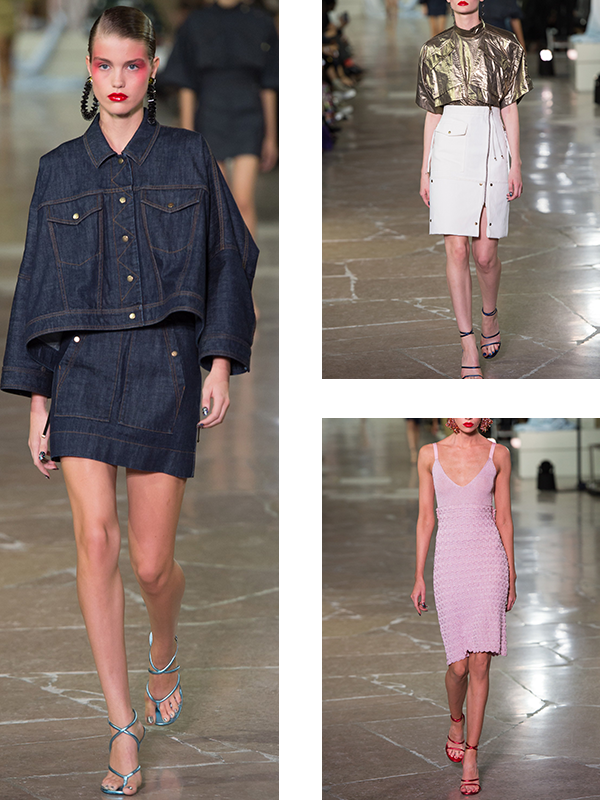 For this Spring collection, the Kenzo woman is one who’s always in control, even if she is nothing but a simple knit bodycon dress with a deep plunging neckline, where the top is very simple with thin straps, attached to a bodice + skirt in a sweet knit pattern, perfect for layering, if you’re not ready to reveal all your greatness in one spin. 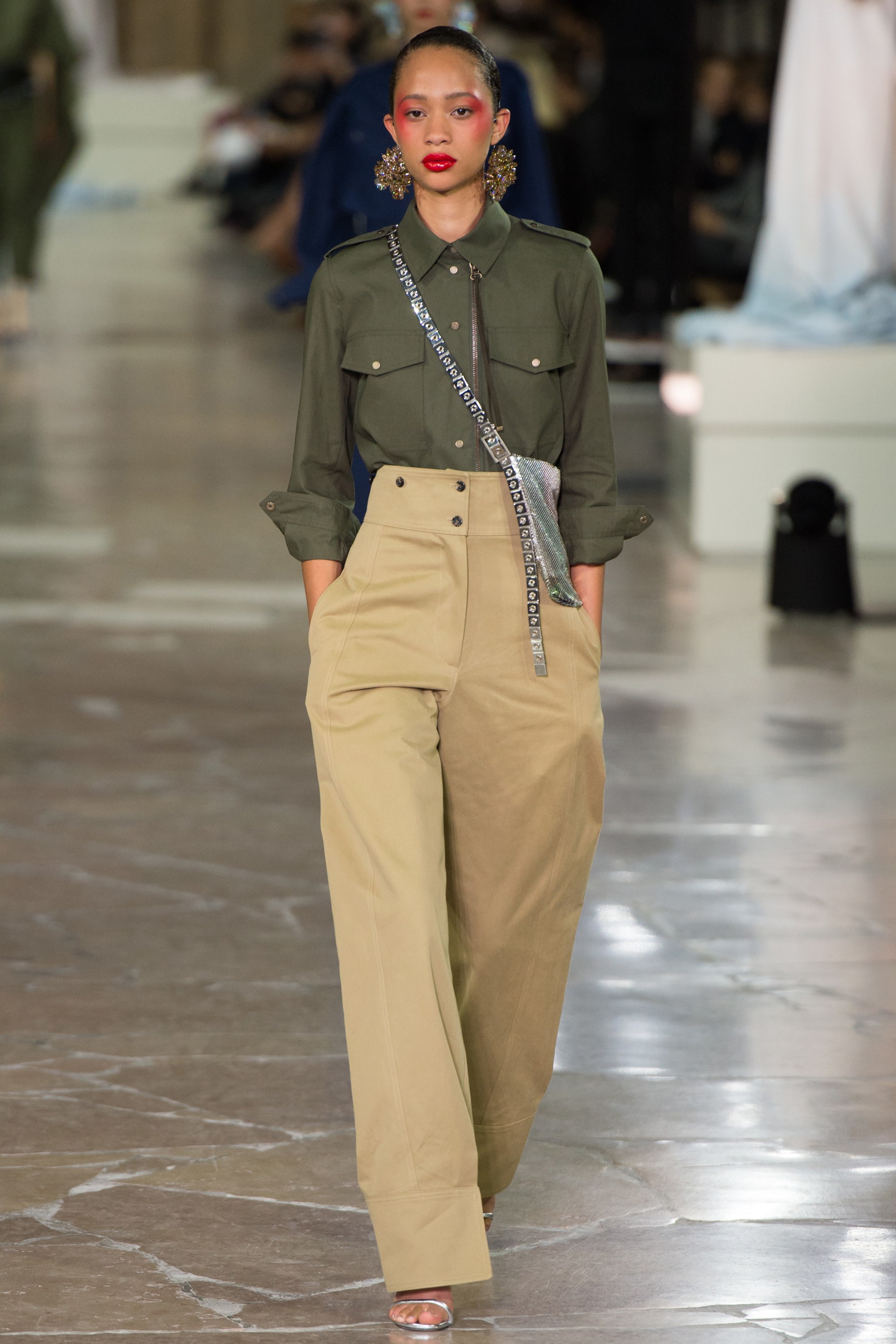 Of course, any mention of Studio 54 or the Seventies in fashion can’t but help throw the late Antonio Lopez’s name around, THE fashion illustrator of the time. In fact, what better way to pay homage to such a talent than to embellish some of the looks throughout this collection with a lot of his imagery. Having called upon the archives of artist Antonio Lopez, referring back to his famous Polaroids featuring many of the ‘It’ models on the scene at the time—Jerry Hall, Pat Cleveland—they took a lot of these images + added them to appear printed on athletic trapeze-style crop tops for day, or on gigantic black + white paillettes like the mini dress below. 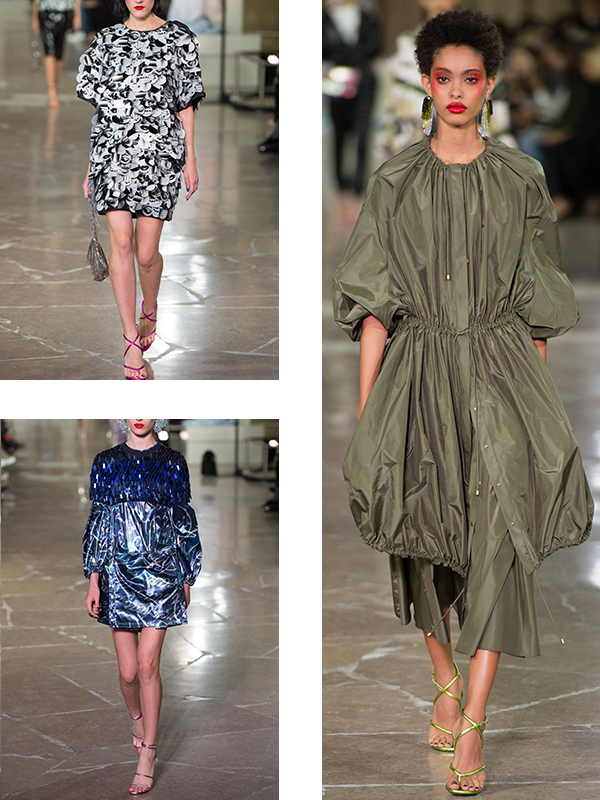 And who can not remember the Disco era without a hint of chainmail in the form of a slinky purse, a dress or even a bra? Well here, Kenzo used it for the best purse ever, not to mention as the front of bra tops, to be worn over white-button down shirts, with stiff folds, exposing black line drawings similar to those of Lopez himself. Either way, the Seventies with a Nineties twist is here to stay + if it keeps looking anything like this, then please, sign me up again + again + again! 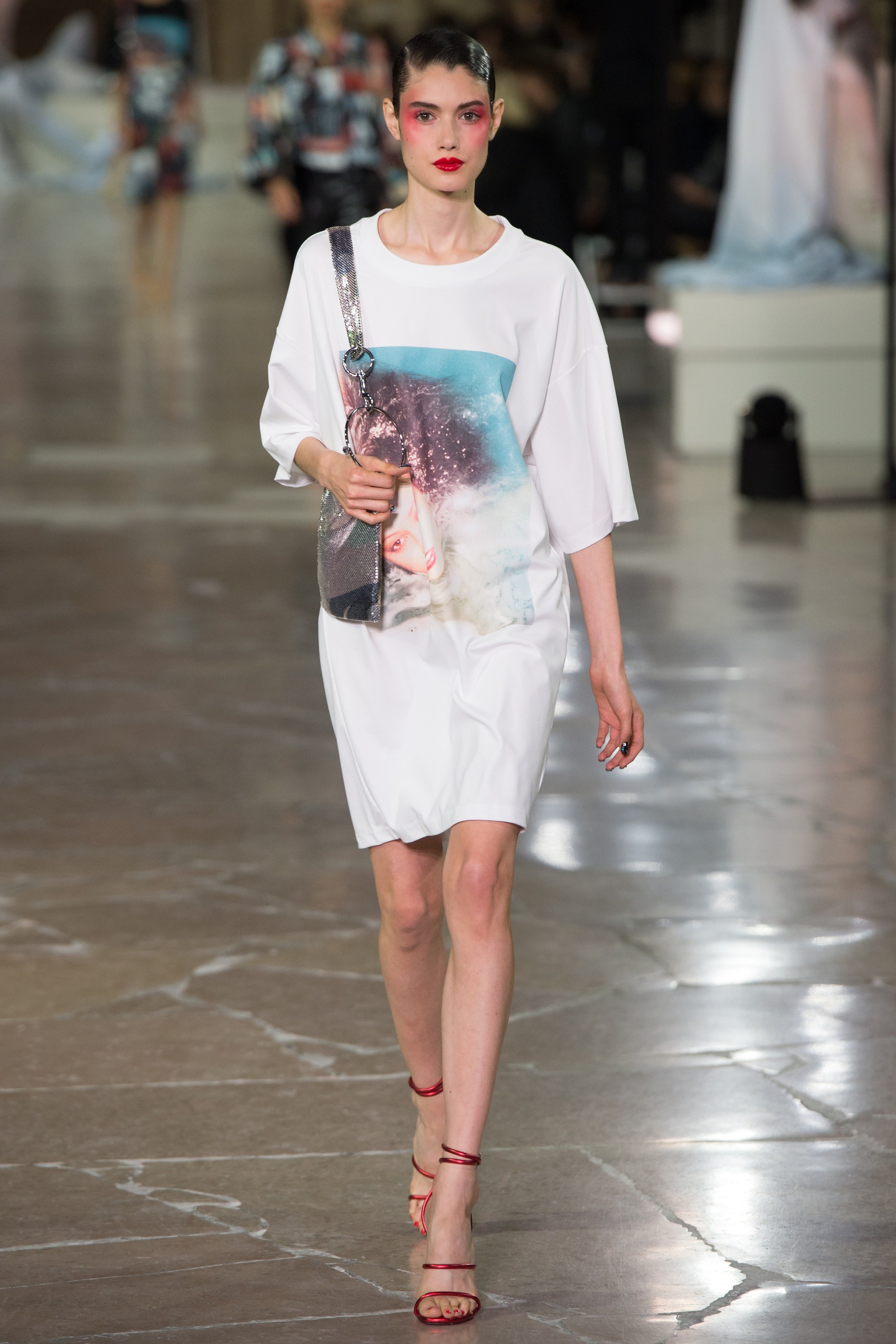 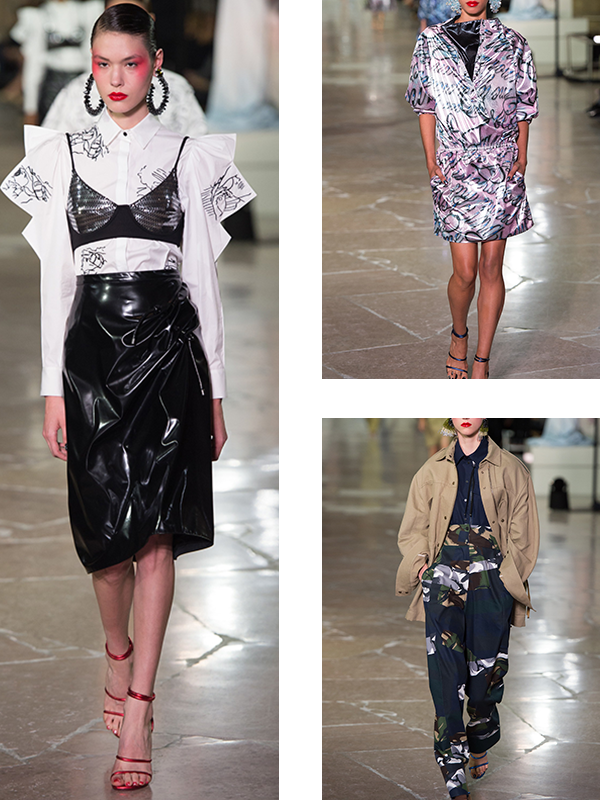