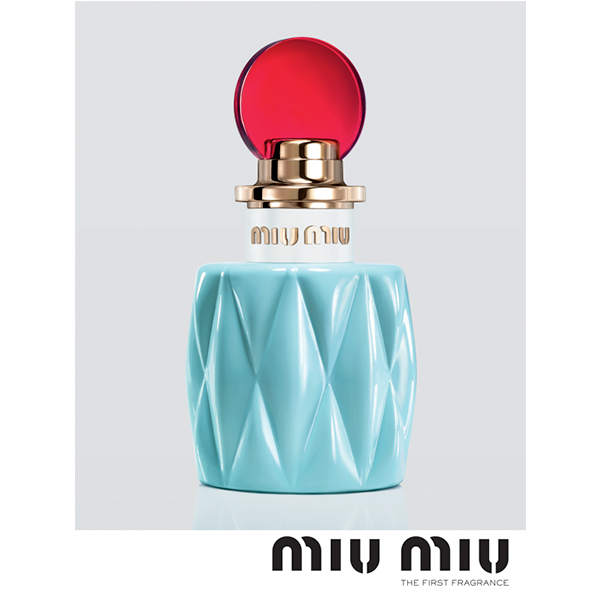 They had me at the packaging!

Set to drop in August, Miu Miu’s first fragrance made its debut in WWD. The fragrance was to be unique, youthful, colorful + sophisticated according to Caroline Javoy, group vice president of marketing for the label at Coty Inc., the fashion brand’s fragrance licensee. But don’t get it twisted – Prada was involved in the fragrance’s creative process, from establishing the Miu Miu scent to what shape + color the bottle should be.

Javoy told WWD, ‘Miu Miu is about this world of contrast,’ where basically its as much about mixing old + new, ordinary + extraordinary, sophistication + whimsical detailing, but in order to do it successfully, you need to have the right balance. And when you’re looking at the Miu Miu’s opaque light blue glass bottle, with a gold + red cap, inspired from vintage bottles + Miu Miu’s matelassé bag, you see these juxtapositions beautifully at play here. ‘We wanted it to be sensorial, super luxurious + sophisticated because [Matelassé] is made from the most luxurious leather,’ said Javoy. The bottle was then crowned with a red see-through plastic disk as a nod to the brand’s mix of various materials found in Miu Miu collections, full of quirky irreverence. If it were up to me, I would buy several bottles just to display them as sculptures.

Miu Miu’s fragrance on the classical side, will be floral including, a lily of the valley note, made by mixing jasmine with rose absolute + some green notes. But on the modern end, akigalawood (a note fractionated from patchouli oil made by Givaudan) was added for its woody + peppery accents.

Now if you happen to be in the U.K. come August, you’ll be able to grab your very own beautiful bottle, but, the U.S.  have to wait until September for Neiman Marcus + Bergdorf Goodman, giving retailers exclusivity in the U.S. through December. The rest of the worldwide launch is also set for September.