Just in time for ‘The Force Awakens’, the latest Star Wars installment, now Irregular Choice is the next shoe company to find inspo in Star Wars for their latest collection. Yet, they’ve done so in such a way that I’m sure these shoes will sell out quick. No one has ever interpreted Star Wars in high fashion footwear like Irregular Choice has.

“I have always been a big Star Wars fan + having had huge success with our seasonal character heels over the years it made sense to try + explore new collaborations with Disney. The collection itself has been in development since last year.”

And you can tell how big of a fan Sullivan is, based on his ingenious shoe designs + attention to detail, like these lightsaber heels below.  They flash when you walk + play sounds from the movies.  Really! 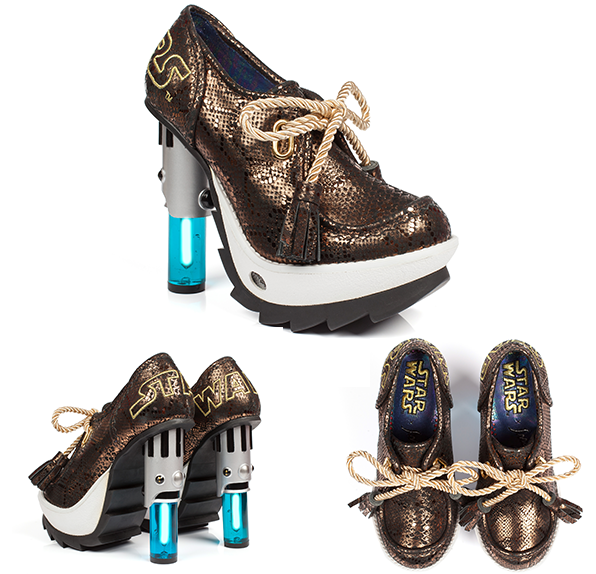 But during the process, Sullivan had to make sure all the designs met with the approval of Disney + he had to make “the characters look correct on specific dimensions + colors for Lucasfilm’s approval.”

“Also, making sure that every detail of the design [+] character is tied into the correct episode. We had to be completely true to each episode, for example you can’t use a print or character from one film alongside any print or characters that didn’t feature in it,”

“This is why we couldn’t [use] Yoda on our outsole prints, as we wanted these to be the same across the whole collection to tie it together, but Yoda didn’t feature in all episodes.” 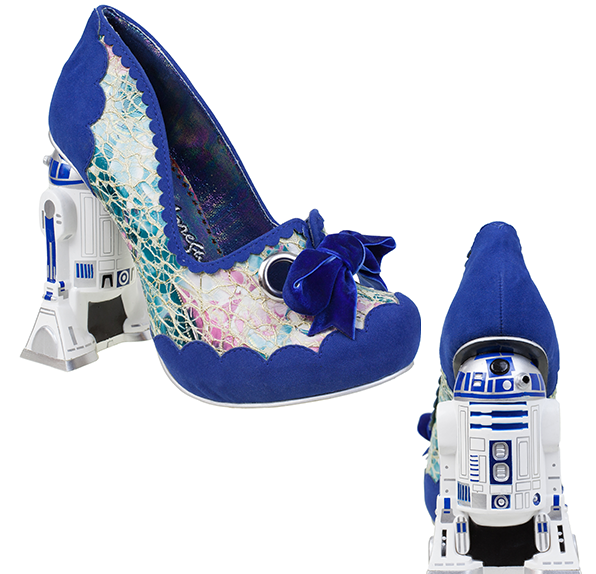 I mean really, who would ever think to to put a mini R2-D2 as a heel on a shoe other than Irregular Choice?

Finding inspiration from frequent traveling + seeing different cultures, granted Sullivan the ability to, as he put it,

“let my imagination run wild + invent the most different shoes I can possibly think of that can accompany an exciting collaboration like Star Wars. I am going for intense shock factor, but still something wearable and affordable + I feel this collection represents both of them things. I am [a] strong believer in creating shoes our fans know they will not see other people wearing down their local. With Star Wars, I knew each style would be super limited-edition from the beginning, so these styles will be even more exclusive. It’s also very important for me to make sure this collection hits affordable price points so that the few lucky Irregular Choice or Star Wars fans can have their own Cinderella moment.” 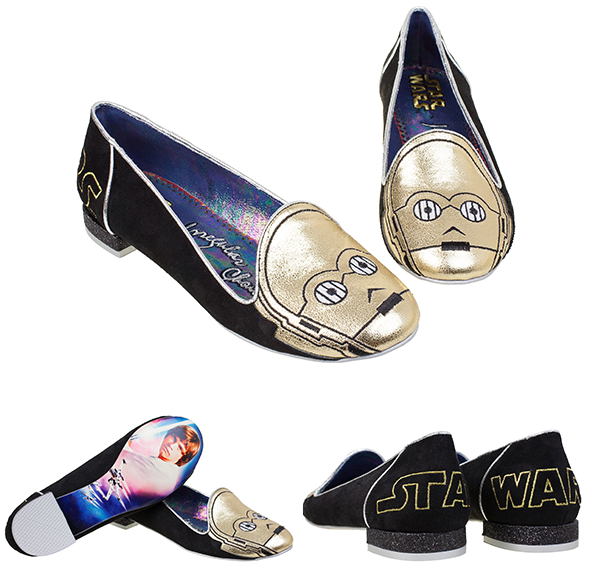 So whether or not you’re a Star Wars fan, I’m sure there will be something unique for everybody.  But come October 30th, when the line is due to drop, in select stores + online at Irregular Choice, you better hope the force is with you, as I doubt it will be hard to keep these amazing shoes in stock.

Good luck + may the force be with you! (Couldn’t help it.)