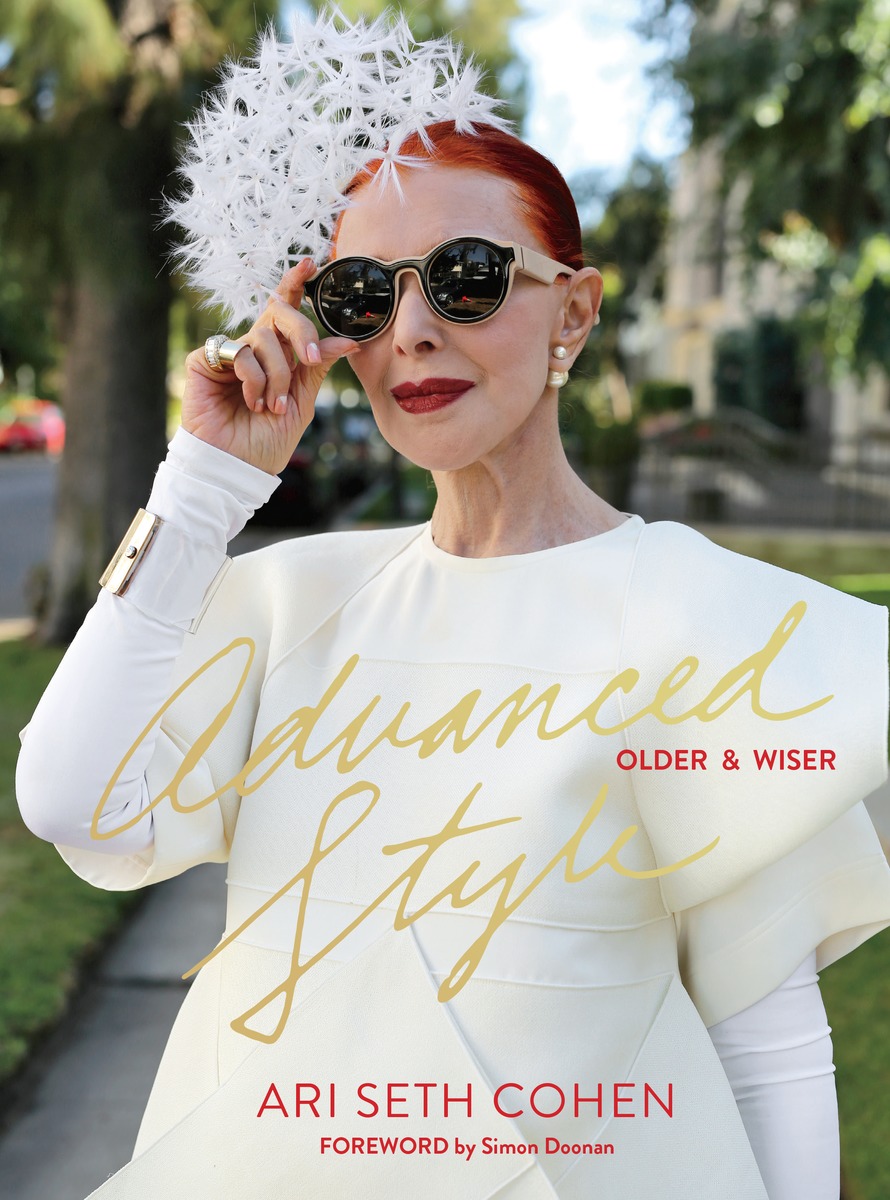 In inimitable fashion writer Lynn Yaeger’s touching Vogue magazine tribute to the late iconic street photographer Bill Cunningham, she cited what appealed to Bill was “an anonymous person with a deep desire to look a certain way, to see + be seen for reasons buried deeply in the psyche, as mysterious as the impulse for decoration itself,” which immediately resonated with each + every portrait of the vast array of characters within Ari Seth Cohen’s book ‘Advanced Style: Older & Wiser’, published by powerHouse Books. First incarnated as a blog of the same name eight years ago, after the passing of Ari’s grandmother + best friend Bluma, through this digital record of the style + stories of some of the city’s most inspiring older people, he was able to pay tribute to her with the profound loss of living without her inimitable guidance. Never in Ari’s wildest dreams did he think this kind of inspiration would “blossom into a global movement re-imagining the picture of the picture of aging-the idea that one can look forward to their later years as one of the most productive, liberating, and rich chapters in their life.

And like most ‘dreams do come true’ stories, since the publication of this first book + the release of the ‘Advanced Style’ documentary, besides the rest being marked as history, it’s been quite an adventure for Ari taking him from Sydney to Tokyo, Rome to Buenos Aires, to meet incredibly stylish + inspirational ladies + gentlemen whose creativity stumps most people forty to twenty years their junior, which lots might find preposterous. But I guarantee that these same disbelievers would be awestruck as many ‘Advanced Style’ fans are upon gazing at truly unique, chic + stylish characters.

Of course, with aging being incredibly stigmatized by American society, enabled by the rise in plastic surgery + weirdo ‘get young quick’ concoctions thanks to the Frankenstein hybrids of pharmaceuticals with beauty products, not to mention the rise in popularity of celeb beauty regimens, age-appropriateness STILL gets much attention, pushing those with ‘advanced style’ to the fringe. But with positive validation if not celebratory accolades, Ari’s subjects are anything but influencers + trendsetters amongst us all. As Creative Ambassador-at-Large of the New York City-based clothing store Barneys, Simon Doonan asks,” Are the ‘Advance Style’ gals + guys at a disadvantage because of their age? Au contraire! Age has emboldened them to adorn themselves with individuality + creativity,” + no one instills this more than ‘Advance Style’s’ cover girl Valerie von Sobel, President of the Andre Sobel River of Life Foundation. 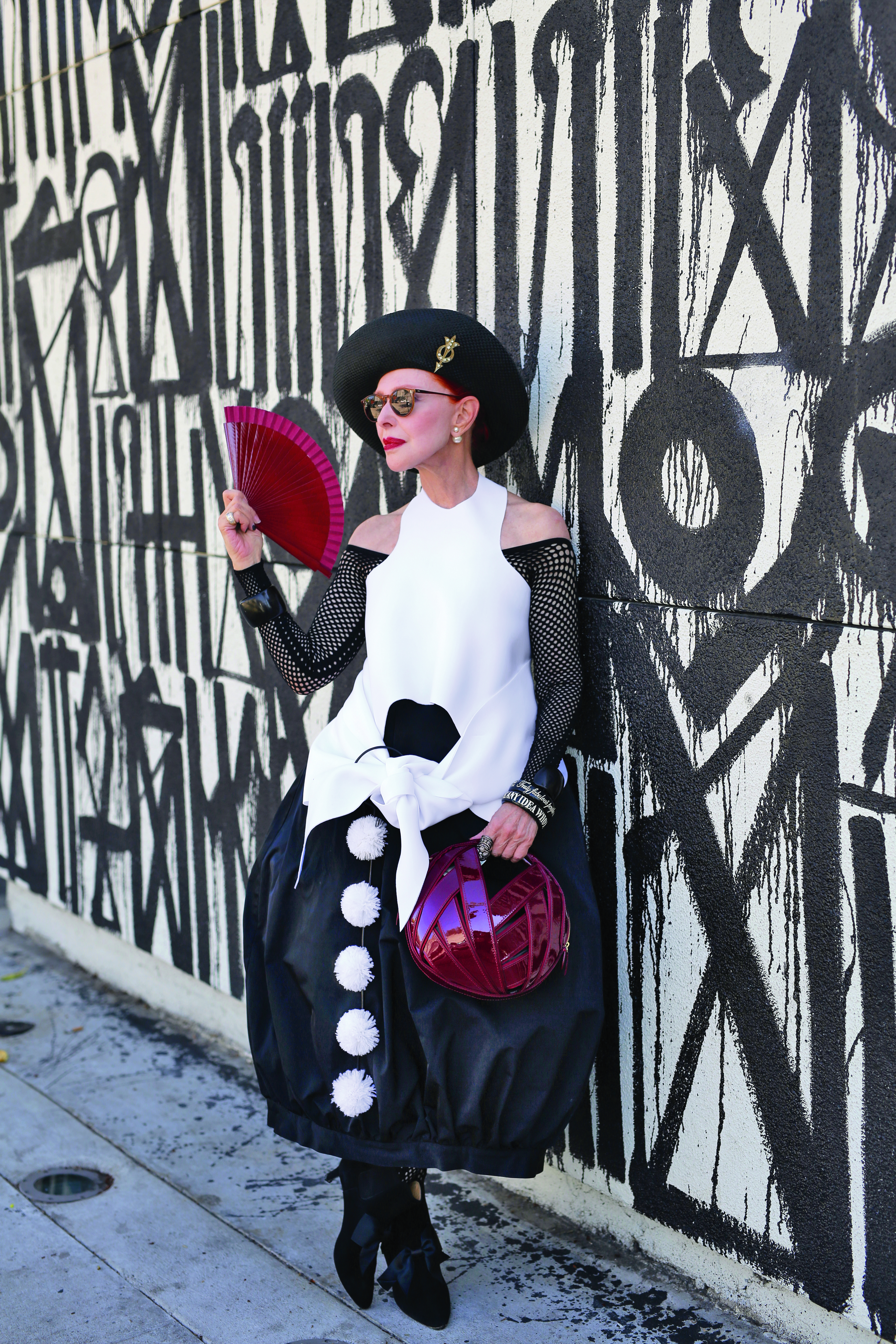 I had the pleasure of sending over a few questions for Valerie to answer, to get to the bottom of the when + how she arrived at mastering her sense of style to this high level of ingenious creativity + the following are some of her answers. I asked Valerie when did she become aware of fashion as a form of self-expression, that set her apart from everyone else + her reply was at eight years old, after having wrapped herself in a large summer scarf of her mother’s, which became part of her lecture to fellow 3rd graders about Scheherazade + the seven veils, leading her to be taken aback by their positive response. 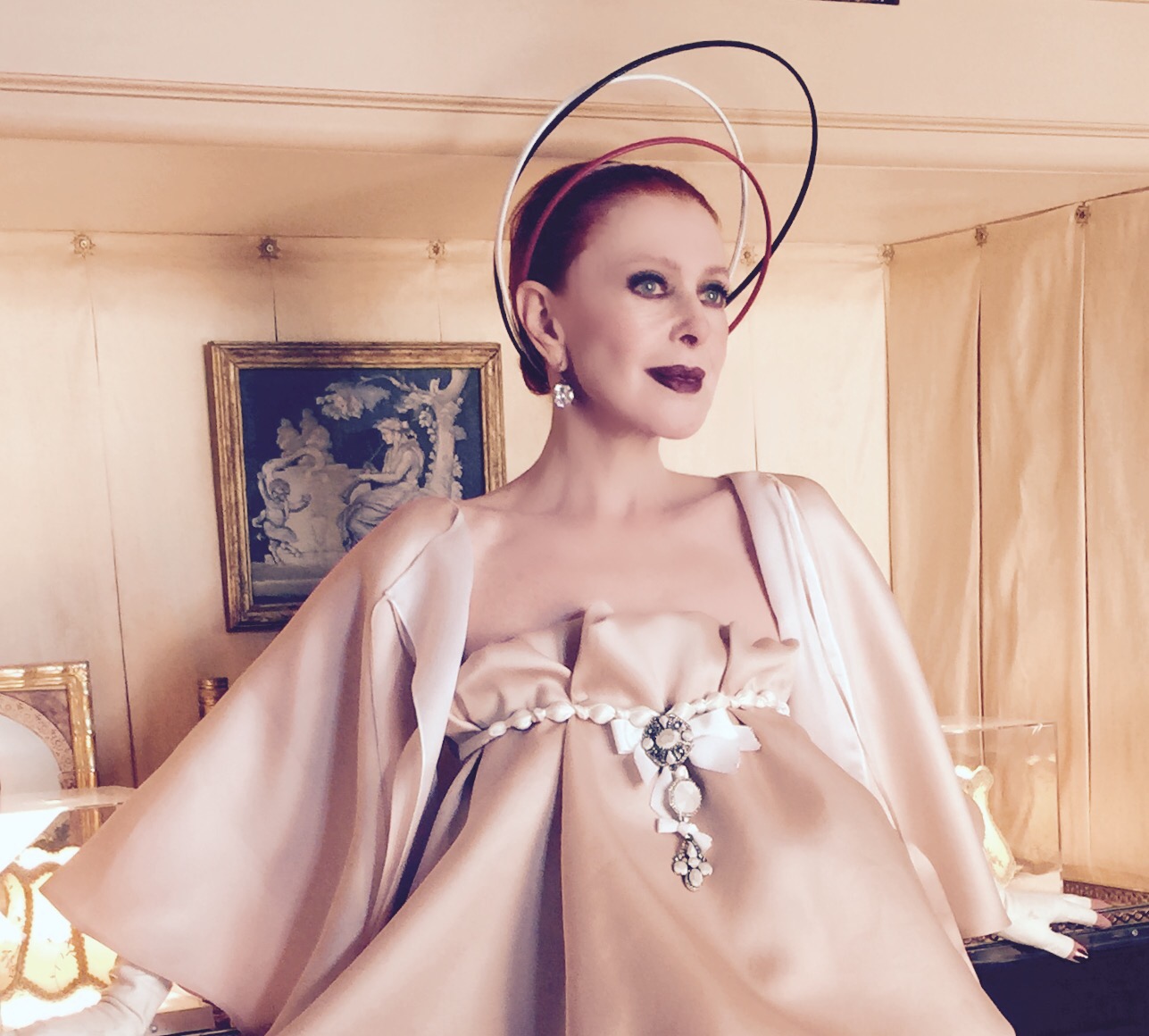 Naming her mom as her fashion role model, she had big shoes to fill. Regarding her mom’s sense of style Valerie said, “Living under the regime of Communist Russia was a great equalizer. Since no luxuries were available to anyone, people who were capable to stand out did so on their talents and wits. I am not sure that standing out was all that safe either. How did I know she was chic? I studied her, compared her to others, and importantly had four issues of Vogue magazine among my treasures. My darling aunt from NY slipped it in a package of clothing that came regularly each Christmas. I will never forget my 90 pound body in the cornflower blue Latex bathing suit, and knew that I never wanted to wear anything that was not becoming, feminine or ill fitting,” which probably accounts for why corsets are her favorite mainstay in her wardrobe arsenal, as they accentuate her small waist. 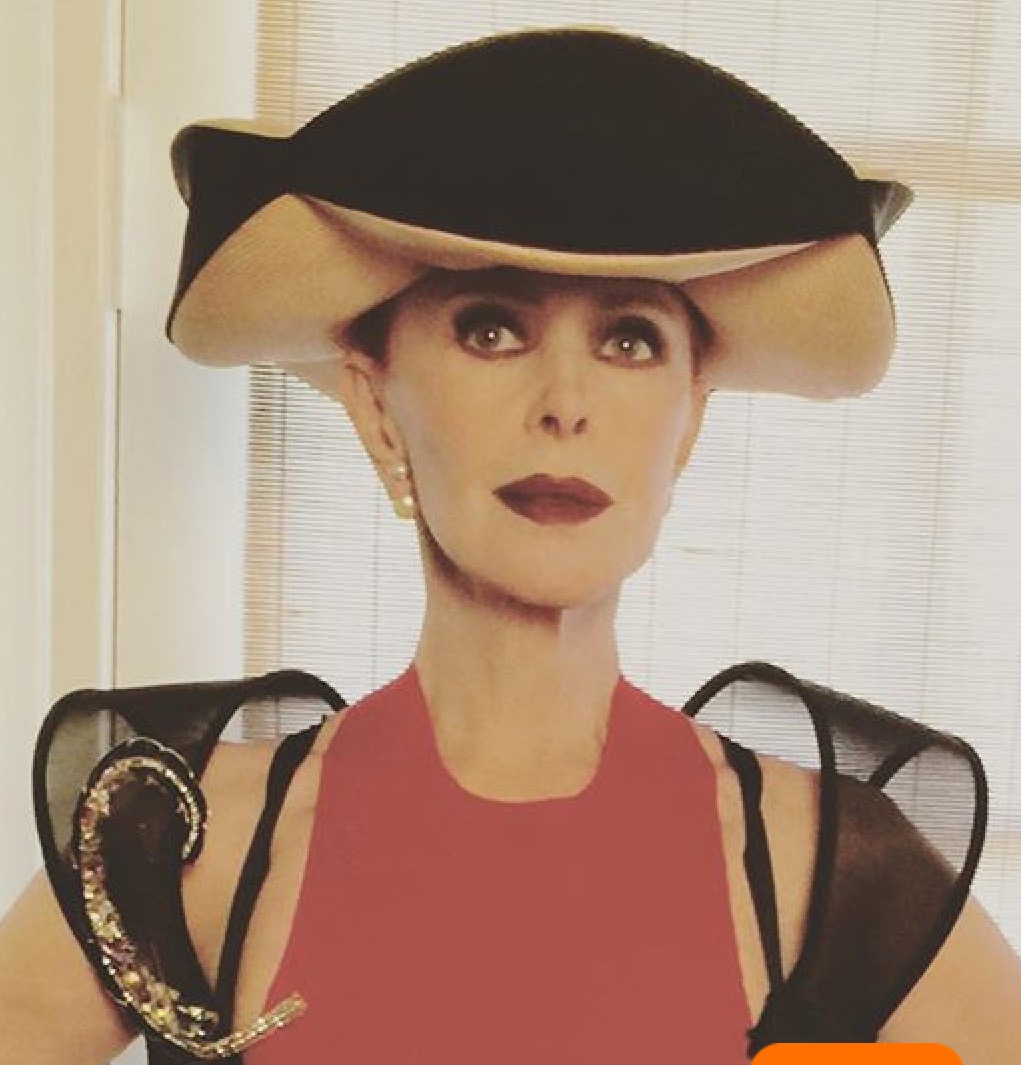 Never a fan of trends, rather than observing them, Valerie’s criteria has always been about how inventive + original what she wears is, a lesson worth branding onto the brains of most amidst the sea of carbon copies devoid of any authenticity or style to call their own these days. Valerie said, “Confidence in style is a process, + you need to master some principles, before you can dismiss them. Breaking the rules comes from a discerning eye, when you know what works, rather than what is “acceptable” or fashionable. The first stage is striving for elegance + fitting in, than the desire to shine (not everyone is comfortable with standing out)… it comes much later when one throws away the rules + start experimentation…that is when you become original. Art is a bit like this,” making you, the end product, a work of art in + of itself.

Patterns, silhouettes + accessories appear to be very important to all of the subjects throughout the book, as you leaf through the pages, but for Valerie, it’s always been about one thing having said, “For me its all about accessories. From harnesses to collars, to hats + jewelry + glasses + neckties + bowties, + bibs + cuffs + belts + cufflinks + nose rings, + ear cuffs, braces for trousers + … endless,” to which I couldn’t agree more. Of course, hugely partial to patterns myself, like Valerie, I too concur on how there’s beauty to be equally found in monotones. 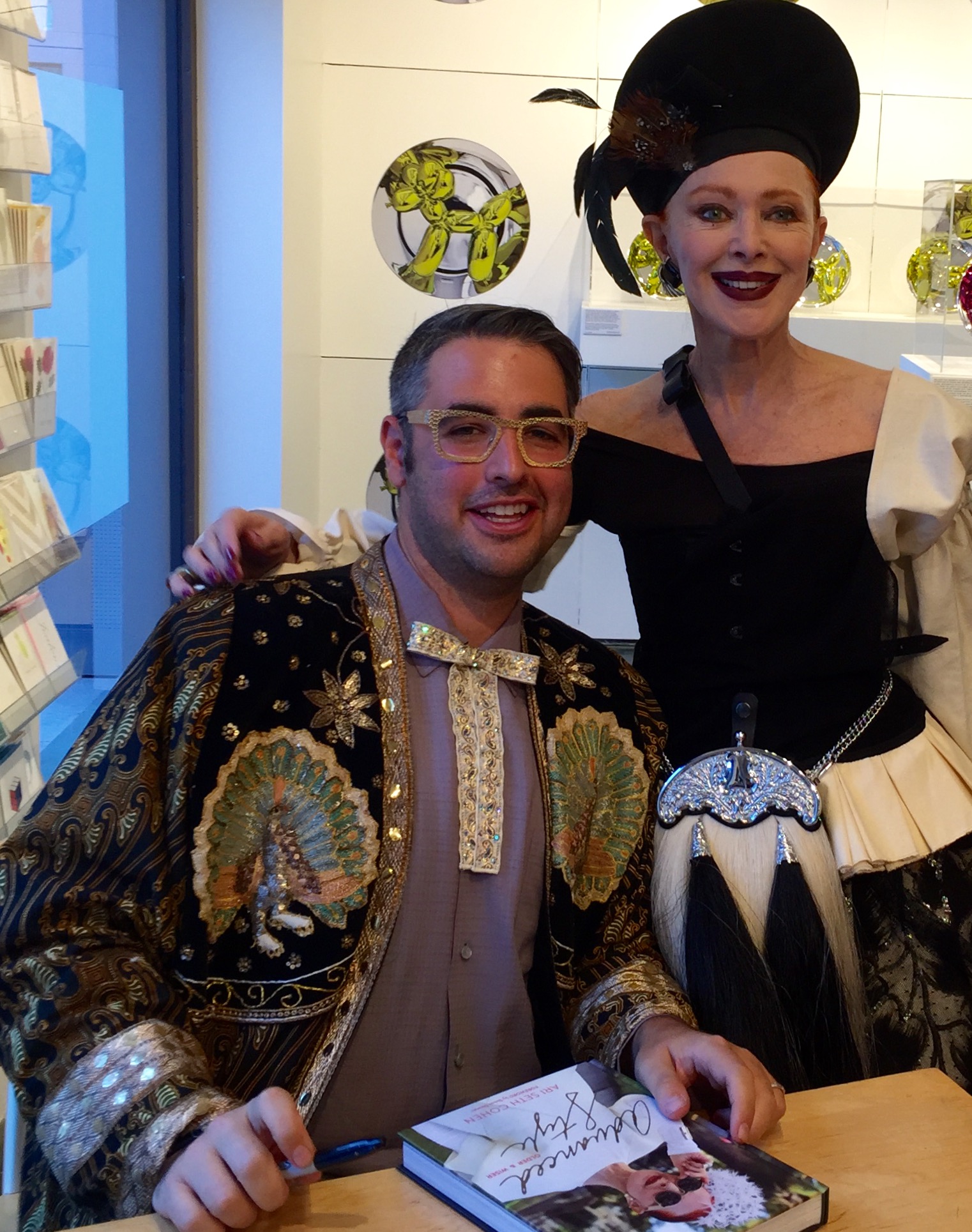 As for Valerie’s last words of style wisdom, she said, “If you are interested, you will develop an instinct. If you have the instinct you will combine masterfully + will never again depend on a trend, you will make your own,” not before asking her if she had any comical styling advice, to which she replied, “Only wear purple feathers in your nostrils under duress,” + who could argue with any of this really?

Just remember, as you leaf through the pages of ‘Advanced Style’, losing yourself in the personification of fantasy becoming real through the many subjects throughout, remember to be like Ari + let your eyes gaze upon “those whose artful + creative dressing is a reflection of their indomitable spirits + the refusal to become invisible,” + get inspired to stand out + live life out loud!