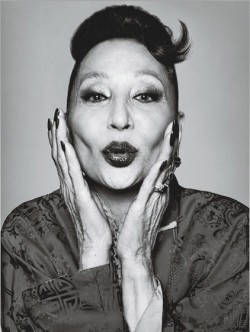 As if a pairing of Steven Klein + Kate Moss could ever deliver disappointing results, here’s Alexander McQueen’s SS/14 campaign film which is, in a word, hypnotic.   It’s a miracle Kate’s never starred in a McQueen ad before, but what a start + @ thirty ten too.  In the beginning, where Kate is staring […]

Aren’t these sick?!  AnOther magazine dug around their archives + found these beautiful pics known as ‘Centrefold SS/02 Concept’.  With concept + art direction by John Galliano + photography by the brilliant Steven Klein, the result was nothing but gorgeous.  Galliano told AnOther, ‘It was all about mixing the rough with the smooth, the hard with […]

For W’s editorial ‘Love In All The Wrong Places’, shot by Steven Klein + styled by Edward Enninful, you are transported into a world worthy of David Lynch’s irreverence.  The lighting of each shot, captures all the beauty behind model Kristen McMenamy‘s beauty, casting her as a femme fatale of sorts, in a film noir. […]

(photos: Courtesy Photo + David M. Bennett) Due to drop in a bunch of June magazines, Alexander Wang, Balenciaga‘s new creative director (as if you didn’t know already), has enlisted the genius eye of photographer Steven Klein + one of my all time favorite models, Kristen McMenamy, to perfectly capture the look + feel of […]