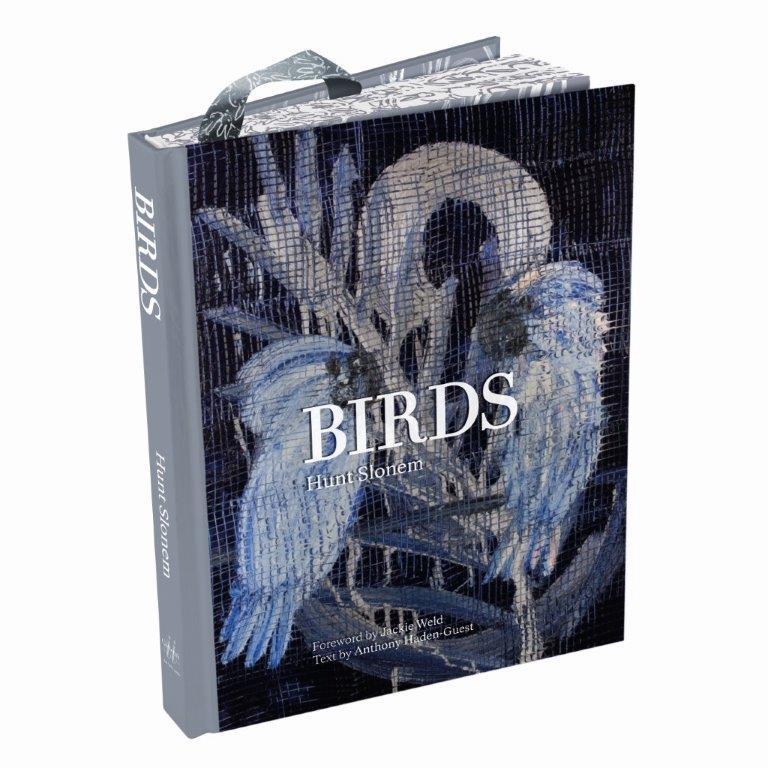 As a lover of birds from a very early age myself, there was no denying Birds by Hunt Slonem, © 2017, published by Glitterati Incorporated, would be a book I would instantly love. What makes Hunt’s work so striking is a lot to process. It’s not so much his brilliant use of color and repetition, but it’s also the tactile aspect of his paintings, with the many layers of paint + his handling of that medium used to create the amazing and globally acclaimed iterations of birds shown throughout this impressive 272-page tome.

This hardcover masterpiece is such that Hunt’s avian subjects seem to beg for a hint of flight with the flip of every page while spilling onto its silver gilded pages, it’s gray satin ribbon bookmarker and all over the inside covers. 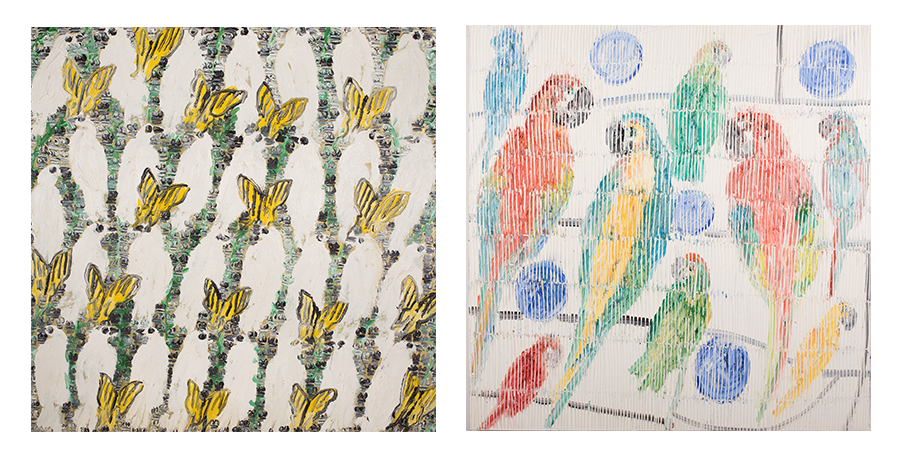 Exotic, lush landscapes of his childhood years in Hawaii influenced Hunt greatly. Writer, reporter and cartoonist Anthony Haden Guest pointed out, “Slonem has noted that he first was fascinated by parakeets when he was ten, and at sixteen bought some birds in a market in Nicaragua,” as A Colorful Home To Suit His Colorful Feathered Friends.

After visiting his New York studio once myself, I was transported into another reality. Each room I passed through was a work of art on its own. Several rooms completely painted in one singular color are briefly captured in the book. These colorful spaces were not only home to Hunt’s variety of exotic birds but to many of his painted works.

Inside, you could see parrots, parakeets, macaws, and cockatoos along with other exotic birds. But you could also see different groupings of the artist’s paintings + sculptures (below). 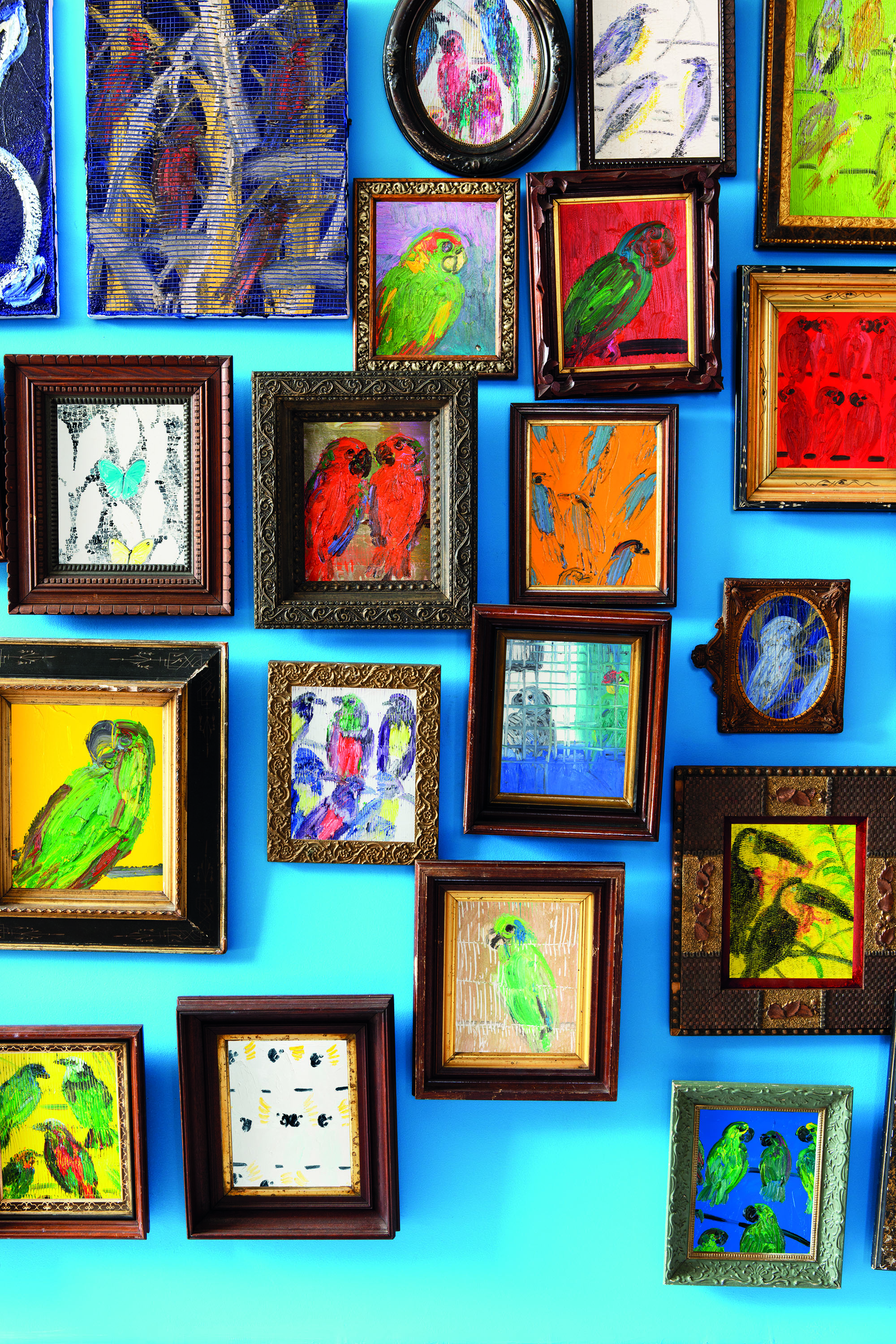 Repetition Proved To Be A Huge Influence

Repetitive imagery, a motif synonymous with Hunt’s work, brought to mind, Andy Warhol. Hunt himself even mentioned this in an Interview magazine December 2011 interview, by Claire Stein. Slone said, “I was influenced by Warhol’s repetition of soup cans and Marilyn.” Adding, “But I’m more interested in doing it in the sense of prayer, with repetition… It’s really a form of worship.”

Repetition is quite evident in his attention to detail. Notice his signature of deep crosshatch marks applied to most of his paintings.

I’m more interested in doing it in the sense of prayer, with repetition… It’s really a form of worship

These indentations, a signature of Hunt’s work, further the theory of repetition. They give the image a sense of movement. But in Guest’s BIRDS essay, ‘You’re In Wonderland’, regarding this repeat technique,

Slonem will usually paint them in profile, as did John James Audubon, and he often arranges them by species + in multiple images, but not so as to emphasize their sameness in the manner of most painters of multiples, but rather to bring out at once their abundant presence and their lively uniqueness.

Author Jacqueline Bograd Weld describes Hunt’s paintings as “literally a whirl of paint-a thick impasto that Hunt grids or swirls at will.” Then adds how “the birds + images appear and reappear in a purely visual space, an all-over style, in which there is no clear beginning or end or edge or corner.”

It reminded her of his stylistic roots in the recurring imagery of abstract expressionism and in Jackson Pollock’s gestural painting. You can find this inside the Foreword A Fond Sonore. This clearly sets the tone for every masterpiece he assumes to create. Slonem always succeeds in creating masterpieces. Applying that last stroke of paint and or that last line cutting through it is a recipe for awe. 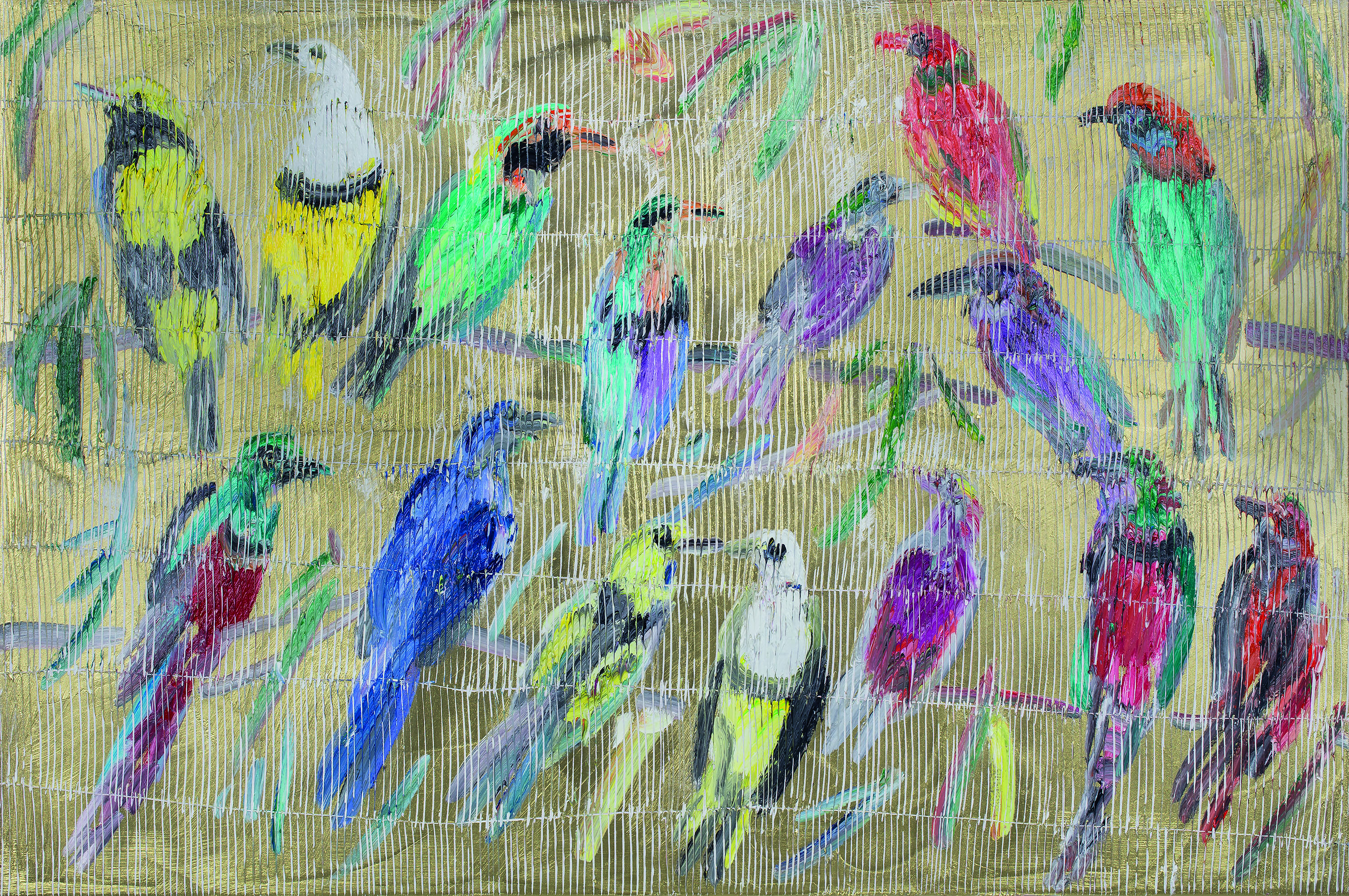 With over one hundred bird paintings, Birds by Hunt Slonem, © 2017, published by Glitterati Incorporated, is sure to make a delightful gift for anyone. If they check off birds, color, patterns, texture, and fashion as their loves, this is the book to get them. But if not for someone else, it’s sure to breathe new life into your own personal art book collection. It’s perfect for escaping into the far tropics enhanced by one artist’s vivid imagination + deep adoration for birds.