If you’re lucky enough to still get tickets to this opera, you’re in for a treat.  If not, the following images might hurt a bit, as they are that much better to experience in person, as I did Tuesday evening.  Described as a poetic piece of biographical theater by Marina herself, the production also starred Director Robert Wilson, Musical Director, Composer, Lyricist, Performer Antony + Performer Willem Dafoe.

It all started in 2007, with a phone call made by Marina, the self-proclaimed ‘godmother of performance art’, to director Robert Wilson, asking him if he would stage her death.  Wilson replied,’ only if I can also stage your life…’.  Initially, you question how Wilson, the undertaker, will be able to also stage someone’s life, with the same poetry applied to their death, but if you’re familiar with the director’s work at all, Robert always manages to find a way to surprise, engage + seduce.

While walking towards my seat, the stage captivated my attention by live dogs in the shadows.  Three corpses lied quietly on coffin shapes, lit in such a way as to make their white faces look almost as stark as LED lights,  while Dobermans randomly walked around the stage, but always starting at the same point, in unison.  Yet what really blew my mind, were the large rawhide bones, scattered about the ‘coffins’, to look like rose petals, simply by casting the perfect red light on each one.

My eyes kept getting fuller, with every amazing scene.  True, a lot of it was very conceptual, but not to the point of walking out, as each scene just arrested all of your senses in one big swoop.  Marina mentioned to The Seventh Avenue Gazette that having been a great admirer of Wilson’s work already, it was very exciting to work with him.  For her, Wilson has invented a new language of theater in relation to time + space, with iconic imagery, painting with light.  And that he does, as seen below. 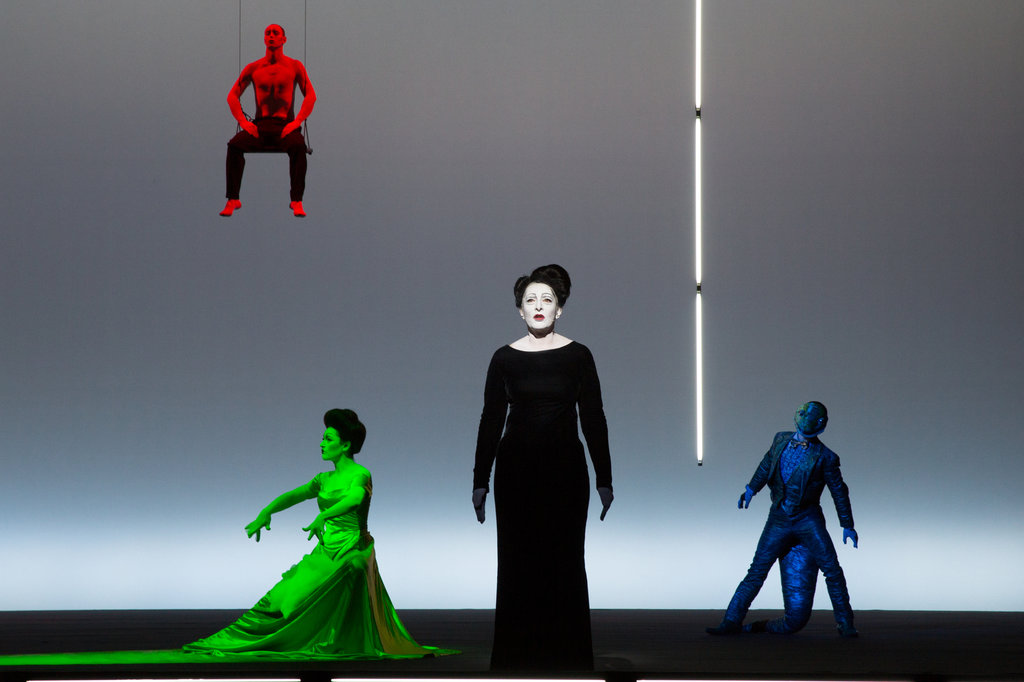 Scene after scene, your impressed more than you were the first time + the last time after that.

Willem Dafoe was excellent, no matter how creepy he looked in his make-up.  In his sexy deep voice, Dafoe’s dialogue just hypnotized you into full submission, even when he made jokes in a different funny voice.  And then, there as Antony with his fierce voice + amazing presence.

To have heard Antony sing ‘Cut The World’ live, which he penned for this project, brought tears to my eyes, in between growing goose-bumps – the best sound system in the world could never replicate the power + haunting beauty of Antony’s voice.

‘The Life + Death of Marina Abramović’ was unforgettable + a definite must-see.