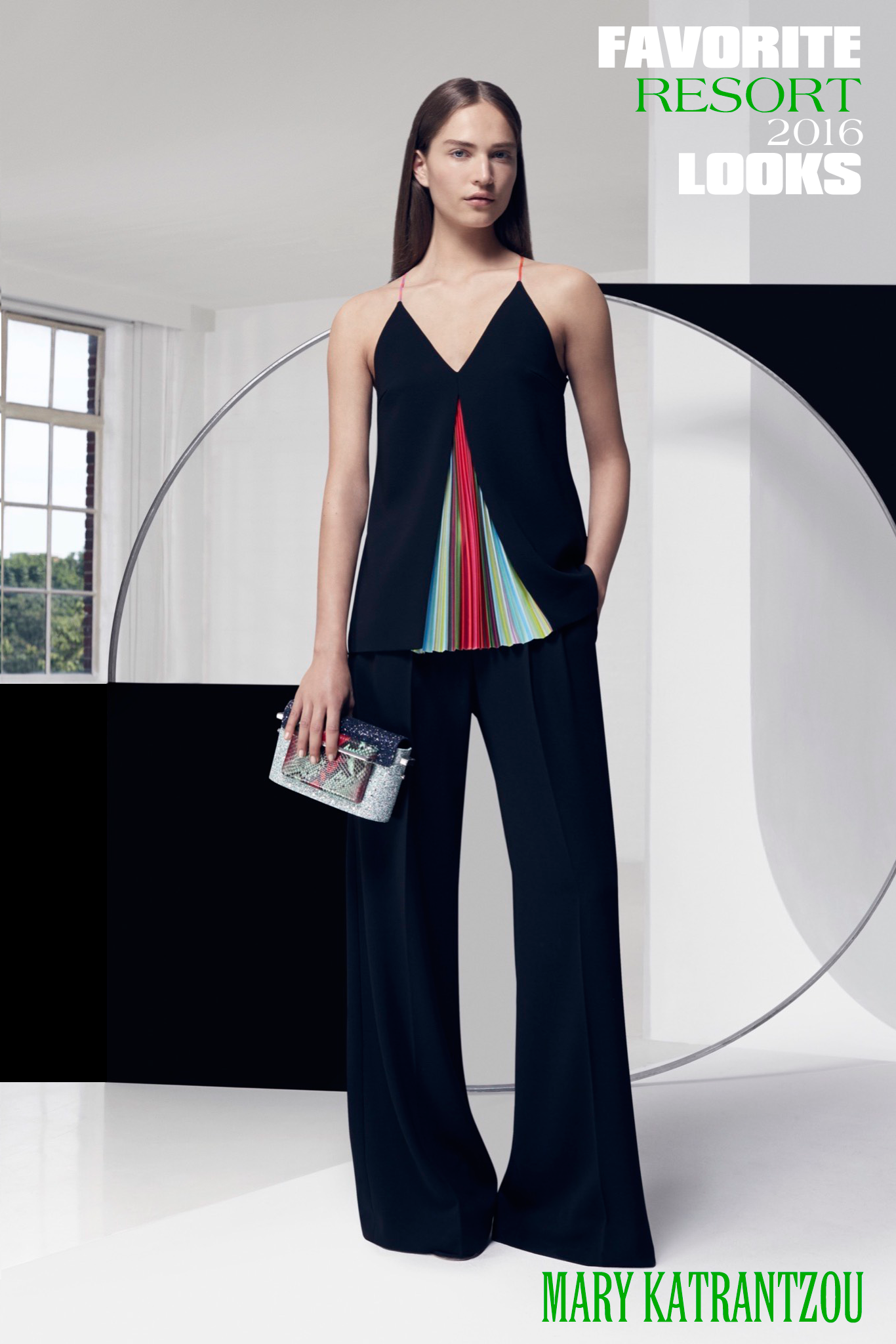 For her Resort collection, Mary Katrantzou played with several patterns, pleats + silhouettes reminiscent of the Seventies, which is okay by me. For this collection, she showed floral prints + various stripe patterns in an array of colorways. There were diagonal rainbow colored stripes on a long sleeved mini dress, with a sheer black portion of stripes, over the right breast + arm. A midi skirt with both wide + thin stripes, peaking up from the hem up to the waist, which start of horizontal but then swerve at a diagonal, in a mix of colors, giving it that vintage vibe. 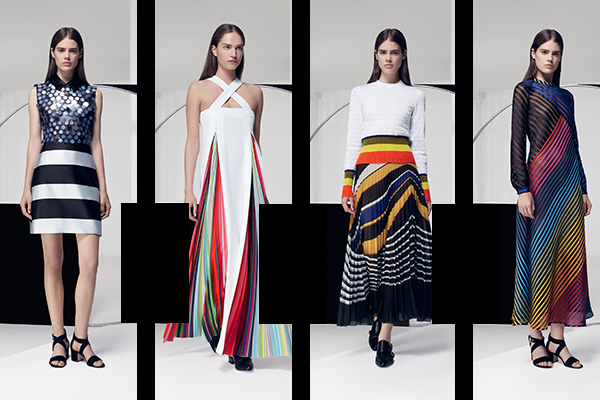 There were other stripes, like those below, that covered a pleated midi dress, up from the hem to waist + from wrist to elbow. On its left, from the waist + to hem + from wrist to elbow, blue + black stripes creep up vertically then get cut off by horizontal stripes, of the same colorway, that look like a loose ribbon, wrapping itself under the bust line. Then you have an illustration of tulips, coming from behind the ‘ribbon’, while wrapping a bit above the elbow. The right of the skirt, however, has olive, black + white stripes that are vertical under the bust line + elbow to wrist. The skirt portion however, had the same color stripes but diagonally. 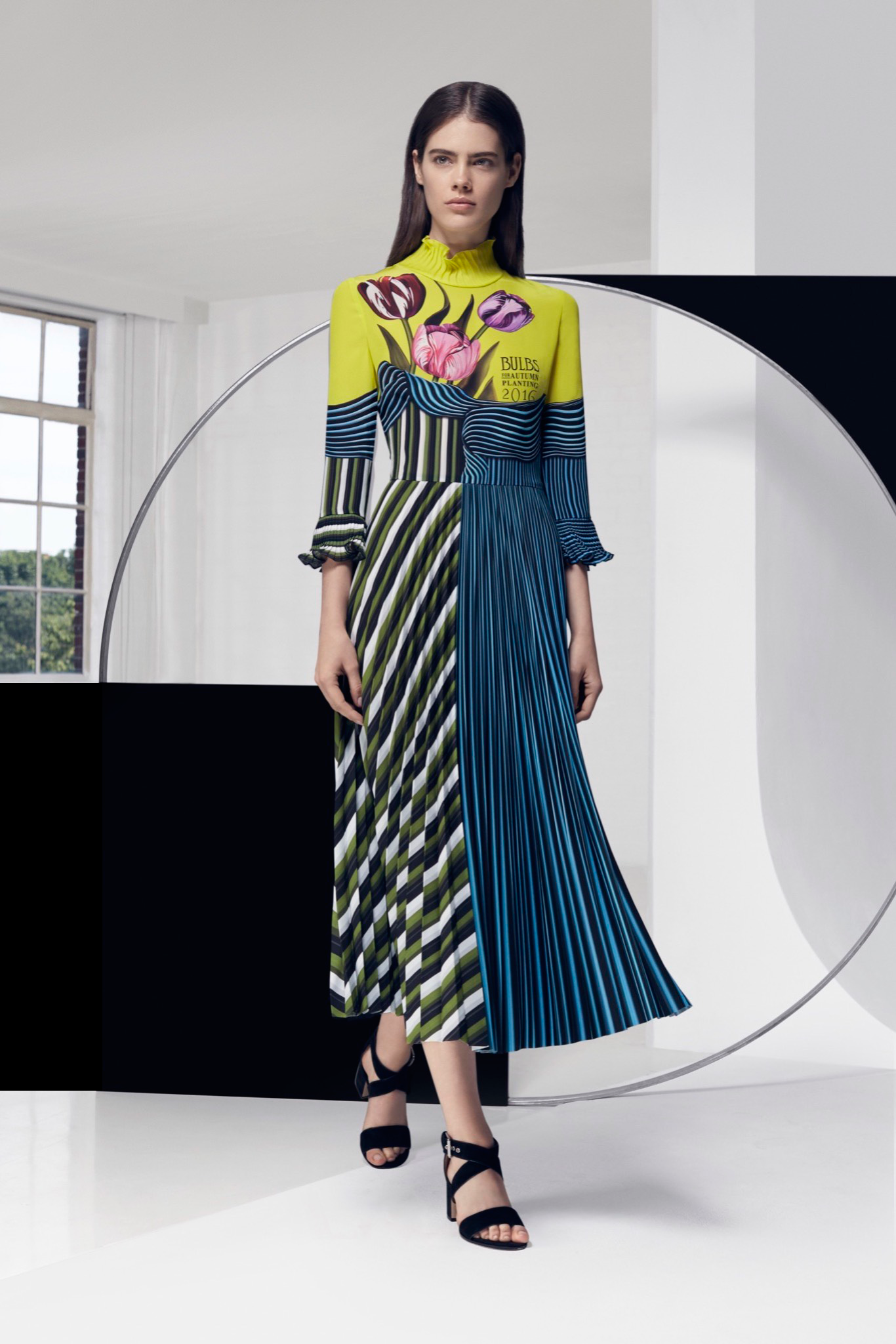 There were plenty of other floral prints, in various sizes + types as seen below. The other silhouettes in the collection were long pants, with a slight flare, along with a three tiered layered dress, with a mix of different colored stripes setting the tone for the illustrated daffodils, running along the right breast to mid torso. But my most favorite look is the pant suit on top, featuring a sweet inner panel of multicolored pleats, in the center, with red spaghetti straps paired with slightly flared wide trousers. That same inner panel pleat of colors was also seen in other looks, like the white midi dress above, coming from the front of the bust line, on both sides, creating a beautiful effect. 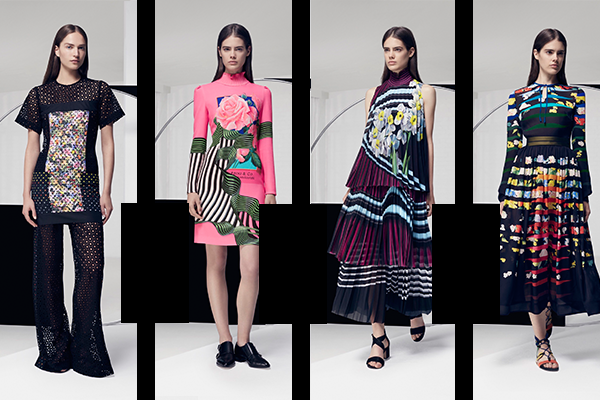