Wake up  + get swept away by Daughter‘s late night recital of ‘Smother’ at London’s Tate Museum.  Set within the Tate’s current ‘Ruin Lust‘ exhibition, mapping four centuries of art’s infatuation with the abandoned + the decaying, the one image below inspired the ‘Smother’ version you hear above. 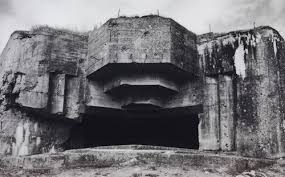 The eerie + ominous ‘Azeville’, by British artists Jane + Louise Wilson was thought of as ‘a pretty terrifying picture to look at, the stark monochrome + the heavy intimidating concrete frame’, by Daughter’s ethereal front woman Elena Tonra.

Along with Swiss-born guitarist Igor Haefeli (minus the band’s drummer Remi Aguilella), this bare-bones version of ‘Smother’ perfectly captures not only the dark mood of the French Nazi bunker in the picture, but also that sense of loss + fading memory.  ’We felt that the song shares this idea of decay,’ Tonra says, adding, ‘Whether it is an abandoned man-made structure or a human body, everything will eventually be accepted back into the earth, however cold + brutal it once was.’

‘Smother’ is from their debut album on 4AD, ‘If You Leave’.