Like anyone needs more reasons to love Solange Knowles, here’s just another – check out her new video for ‘Losing You’, a collaboration with producer Blood Orange‘s Dev (Devonté) Hynes (also responsible for his collaboration on Sky Ferreira’s ‘Everything is Embarrassing‘ along with producer Ariel Rechtshaid).  Set in South Africa, surrounded by a rainbow of colors, from the walls to the amazing looks by Le Sape (Society for the Advancement of People of Elegance, which dates back to 1922), Cape Town locals and Solange’s many ensembles, you’re quickly hooked.

Solange seduces us with her biting sick swagger, mixing + playing with patterns in various designs including Kenzo, Opening Ceremony, DVF, Suno + J.Crew, you can’t but help but smile, jump up + start dancing yourself with complete abandon, similar to the concept + feel of the video.

Of the video’s feel Solange told V magazine she and director Melina Matsoukas decided to film ‘Losing You’ in South Africa with no real firm concept. 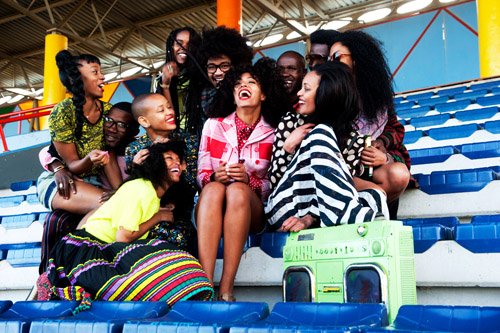 They just grabbed a camera,  with a sense of spontaneity, capturing a few things that were crucial to Solange’s vision:

the vibe of her friendship and all of the crazy escapades she gets herself into with the abstract and elegant Le Sape society (Society for the Advancement of People of Elegance) formed in The Congo (dating back to 1922) which was documented by Daniele Tamagni in his Gentleman of Bacongo book and her NYC friends that flew to Cape Town to be part of the fun.

Love the vintage radio backdrops, the barber shop graphics, the dancing, the clothes, the patterns, the colors – but above all, the song – the tight beats along with Solange’s voice is just plain wonderful and will fall prey to being on ‘repeat’ for a while.