To see these bottoms just hanging there, you can’t help but relate them to sculpture. But when worn, they take on a sense of magic + majesty after you see what’s really going on underneath. 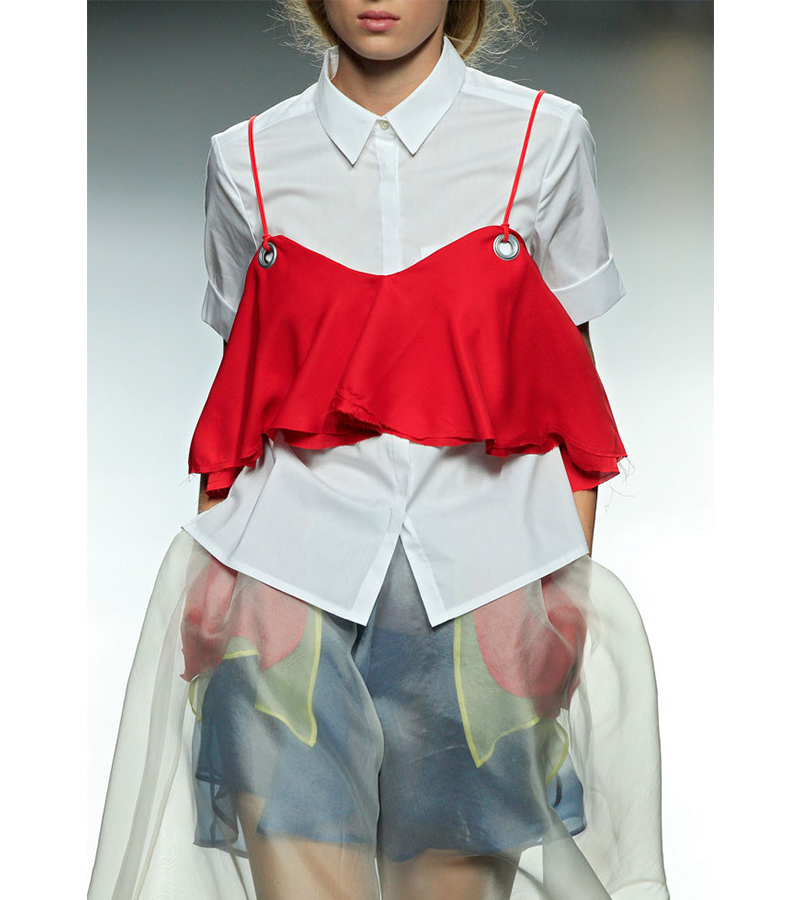 Upon the wearer slipping into these ‘Rustic Organza Trousers’ by Juan Carlos Pajares, you get to see the different geometric shapes that give these organza culottes presence. But it’s the layers of primary colored silk organza, enshrouded by white, its base color, that gives its silhouette that eye-catching appeal. Underneath the white wide leg trousers or culottes, you have organza blue shorts with pockets decorated by a red circle on top of yellow squares, easily making them pop.

Part of a collection inspired by Bauhaus, Pop-Art and the Memphis group + influenced by three cities (Madrid, London + Paris) + two schools (ESDMadrid + Central Saint Martins), is what led to this amazing experimental pair of trousers sure to be coveted by its owner for decades to come. On the collection, Pajares told NOT JUST A LABEL, “Moholy-Nagy, Rietveld, Kandinsky, Mondrian, Lichtenstein, Sottsass + De Lucchi works dialogue + manifest themselves through shapes, layered constructions, embroidery + prints,” which is plain to see in these trousers, with each shape made to float above the other, without really being attached (Look closer + see what I mean.).

And let’s not dismiss the styling effort here; The pairing of a loosely cropped red cami, with large rivet detail, over an untucked short-sleeved white button-down shirt is perfect. Pure genius, wouldn’t you agree? Now had the designer agreed on using another fabric, I don’t think the execution would’ve been as successful in creating such flow of movement.

So if you too want to own a piece of art + or gain new fans, through sheer adulation, head over to NOT JUST A LABEL, for your very own ‘Rustic Organza Trousers’ by Juan Carlos Pajares.